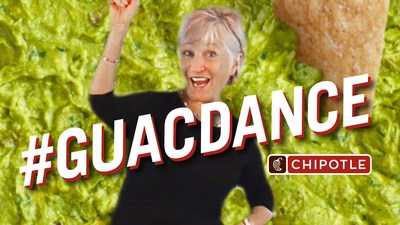 "We were blown away by the passion people have for our guac and the enthusiasm for National Avocado Day," said Chris Brandt, Chief Marketing Officer of Chipotle. "The overwhelmingly positive responses, as seen in both our digital orders and the 430 million #GuacDance TikTok videos, confirm our fans' real appreciation for Chipotle's handmade guac."

ABOUT CHIPOTLE
Chipotle Mexican Grill, Inc. (NYSE: CMG) is cultivating a better world by serving responsibly sourced, classically-cooked, real food with wholesome ingredients without artificial colors, flavors or preservatives. Chipotle had over 2,500 restaurants as of June 30, 2019, in the United States, Canada, the United Kingdom, France and Germany and is the only restaurant company of its size that owns and operates all its restaurants. With more than 80,000 employees passionate about providing a great guest experience, Chipotle is a longtime leader and innovator in the food industry. Chipotle is committed to making its food more accessible to everyone while continuing to be a brand with a demonstrated purpose as it leads the way in digital, technology and sustainable business practices. Steve Ells, founder and Executive Chairman, first opened Chipotle with a single restaurant in Denver, Colorado in 1993. For more information or to place an order online, visit WWW.CHIPOTLE.COM.