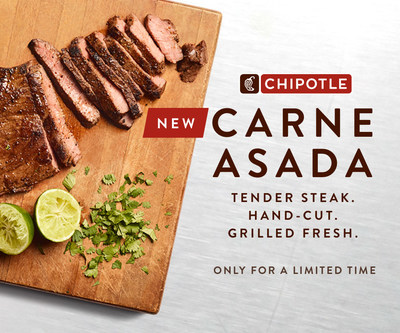 This premium protein is cut into tender slices, seasoned with fresh squeezed lime and finished with hand-chopped cilantro and a blend of signature spices. Chipotle's Carne Asada has been officially approved for the Whole30® program, and is compliant with a Paleo diet.

Additionally, Chipotle teamed up with film director David Gelb to spotlight a behind-the-scenes look of the careful preparation and details that go into Chipotle's Carne Asada. Gelb, with Independent Media, is an American director and the creator of Jiro Dreams of Sushi, Chef's Table and Street Food. These spots are a continuation of Chipotle's Behind the Foil campaign that launched in February 2019. This content highlights real Chipotle team members and provides an inside look at the real, fresh food and preparation that happens in Chipotle kitchens every day.

The new Carne Asada joins Chipotle's original steak on menus for a limited time after successfully going through the company's stage gate process, including pilots in Cincinnati, Ohio and Fresno, California. Carne Asada is Chipotle's newest protein addition since the return of chorizo in September 2018.

"Our Carne Asada steak is amazingly tender, hand cut, and grilled fresh every day. It performed incredibly well in the test markets and we're excited to be introducing this terrific, new steak nationwide for a limited time," said Chris Brandt, Chief Marketing Officer of Chipotle.

Customers nationwide can also get Carne Asada delivered straight to their doors free every Sunday in September.

Free delivery offer is valid only for orders placed and fulfilled on Sundays in September 2019 from participating Chipotle locations within Chipotle's delivery areas, during normal operating hours for such locations. Minimum order $10, maximum order $200, in each case excluding tax. Deliveries are subject to availability. Redemptions of Chipotle Rewards and other promotional offers may be included in a qualifying delivery order but do not count towards satisfaction of minimum purchase requirements. The offer cannot otherwise be combined with other offers or promo codes and is non-transferrable. No adjustments to previous purchases. Valid only at order.chipotle.com and on the Chipotle app; not valid on orders placed via third-party delivery platforms. Chipotle reserves the right to modify or terminate this offer at any time without notice.  Additional restrictions may apply; void where prohibited.

ABOUT CHIPOTLE
Chipotle Mexican Grill, Inc. (NYSE: CMG) is cultivating a better world by serving responsibly sourced, classically-cooked, real food with wholesome ingredients without artificial colors, flavors or preservatives. Chipotle had over 2,500 restaurants as of June 30, 2019, in the United States, Canada, the United Kingdom, France and Germany and is the only restaurant company of its size that owns and operates all its restaurants. With more than 80,000 employees passionate about providing a great guest experience, Chipotle is a longtime leader and innovator in the food industry. Chipotle is committed to making its food more accessible to everyone while continuing to be a brand with a demonstrated purpose as it leads the way in digital, technology and sustainable business practices. Steve Ells, founder and Executive Chairman, first opened Chipotle with a single restaurant in Denver, Colorado in 1993. For more information or to place an order online, visit WWW.CHIPOTLE.COM. 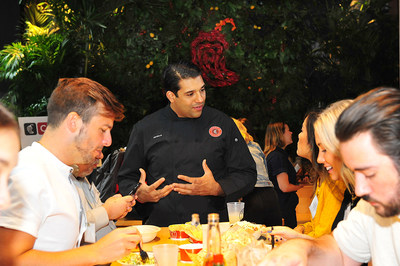