Chipotle To Accelerate Expansion Into Canada

NEWPORT BEACH, Calif., March 23, 2021 /PRNewswire/ -- Chipotle Mexican Grill (NYSE: CMG) today announced it will continue its expansion into Canada with a new location in Surrey, BC that is scheduled to open on March 30. The restaurant will be Chipotle's first new Canadian location since its Markham, Ontario restaurant opened its doors in October 2018. 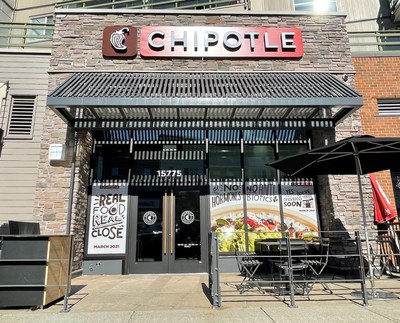 Chipotle also has plans to unveil its first Canadian Chipotlane at a new restaurant opening in Port Coquitlam, BC this summer. Chipotlanes, the brand's drive-thru digital order pickup lanes, increase access and convenience by providing a speedy and seamless guest experience in under a minute.

In addition to the Surrey and Port Coquitlam locations, Chipotle plans to open six additional restaurants in British Columbia and Ontario over the next 12 months. There are currently 23 Chipotle restaurants in Canada, with locations in the greater Toronto and Vancouver metro areas as well as Ottawa and London, Ontario.

"Canada has cleared our stage-gate process, and we are ready to accelerate new restaurant openings," said Jack Hartung, Chief Financial Officer. "We will be experimenting with different location formats and restaurant designs throughout the country to gauge consumer preferences in the various markets."

Increasing Access to Real Food
Chipotle has invested in digital platforms and delivery partnerships in response to growing demand in Canada. In May 2020, Chipotle inked a deal with Uber Eats to grow its delivery footprint for Canadian guests, and a month later, the brand officially launched the Chipotle app in Canada. Fans in Canada can now order their favorite Chipotle meals via chipotle.ca or the Chipotle app, as well as through DoorDash and Uber Eats.

Menu Innovation
Chipotle's digital progress has been coupled with growing menu innovation for Canadian customers. In January, the brand launched Cilantro-Lime Cauliflower Rice, its latest plant-based option, in Canada for a limited time. Earlier this month, Chipotle added its first-ever customizable digital entrée, the Hand-Crafted Quesadilla, to the Chipotle app in Canada and chipotle.ca. The Quesadilla is folded and pressed using a new custom oven in Chipotle's Digital Kitchen, which melts the cheese perfectly and enables restaurants to make Quesadillas more quickly and conveniently. This marks the first customizable entrée Chipotle has added to its menu since it introduced a salad option 17 years ago.

"Given the rising popularity of Chipotle's real food in Canada, we believe there is a massive growth opportunity in this international market," said Anat Davidzon, Managing Director – Canada, Chipotle. "Our team is focused on continuing to find ways to increase access to Chipotle for our Canadian fans."

ABOUT CHIPOTLE
Chipotle Mexican Grill, Inc. (NYSE: CMG) is cultivating a better world by serving responsibly sourced, classically-cooked, real food with wholesome ingredients without artificial colors, flavors or preservatives. Chipotle had over 2,750 restaurants as of December 31, 2020, in the United States, Canada, the United Kingdom, France and Germany and is the only restaurant company of its size that owns and operates all its restaurants. With nearly 88,000 employees passionate about providing a great guest experience, Chipotle is a longtime leader and innovator in the food industry. Chipotle is committed to making its food more accessible to everyone while continuing to be a brand with a demonstrated purpose as it leads the way in digital, technology and sustainable business practices. Steve Ells, founder, first opened Chipotle with a single restaurant in Denver, Colorado in 1993. For more information or to place an order online, visit WWW.CHIPOTLE.COM.