BOWLS FOR GOALS: CHIPOTLE TO DROP FREE ENTRÉES FOR EVERY GOAL SCORED BY THE U.S. MEN'S NATIONAL SOCCER TEAM, UP TO $1 MILLION IN FREE CHIPOTLE 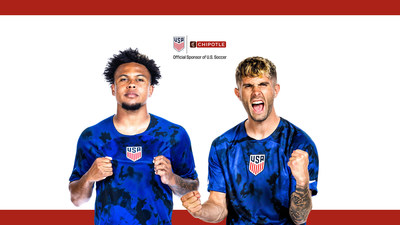 Real Food For Real Athletes
Christian Pulisic of the U.S. Men's National Team has been a longtime fan of Chipotle's real food. When he played professionally in Dortmund, Germany, Christian would drive three hours to visit the nearest Chipotle restaurant in Frankfurt for a taste of home. Rising star Weston McKennie's first meal when he returns home from Italy is always Chipotle and he regularly meets up with USMNT teammates at a Chipotle restaurant when they're in the U.S. together.

Bowls For Goals
As part of its support of U.S. Soccer, Chipotle will drop 5,000 free entrée codes every time the U.S. Men's National Team scores a goal during its upcoming international tournament.* The brand will give away up to $1 million of free Chipotle through the program.

After every USMNT goal, a unique code for a free entrée will be revealed via a collaborative tweet between Chipotle (@ChipotleTweets) and U.S. Men's National Team (@USMNT). The first 5,000 fans to text the unique code to 888222 will receive a code that can be used for a free entrée*.

Fans will also be able to experience Christian and Weston's go-to training meals while watching the USMNT this fall. The Christian Pulisic Bowl and Weston McKennie Bowl will be available in the Chipotle app and on Chipotle.com for a limited time.

American Outlaws Content Series
Over the next few weeks, Chipotle will collaborate on exclusive content with Brian Hexsel, current Chipotle Field Leader and organizer of the American Outlaws, a non-profit group dedicated to supporting U.S. soccer teams. Brian and Chipotle will deliver an on-the-ground, behind-the-scenes video series from the tournament, including an exclusive interview with Christian Pulisic and Weston McKennie, conversations with fans who are attending the tournament, a chat with the leader of the English fan club, and gameday footage. Content will be featured on the American Outlaws social channels (@americanoutlaws and @americanoutlaws).

"Chipotle's real food fuels elite athletes and it has been a constant ingredient in the lives of many USMNT players," said Chris Brandt, Chief Marketing Officer at Chipotle. "We're proud to support the new generation of U.S. Soccer stars as they compete overseas against the world's best."

Higher menu prices are charged for delivery; additional service fees applied at checkout as well. Offer valid for $0 Delivery Fee for orders placed and fulfilled on November 21, 25, or 29, 2022 only, within Chipotle's delivery areas from participating U.S. Chipotle locations, during normal operating hours for such locations. Minimum order $10/maximum order $200, each excluding tax. Deliveries and redemption subject to availability. Valid only at chipotle.com or on the Chipotle app; not valid on catering or orders on third party delivery platforms. User must apply code in the promo code field at digital checkout to qualify. Redemptions of Chipotle Rewards and other promotional offers may be included in a qualifying delivery order but do not count towards satisfaction of minimum purchase requirements. May not otherwise be combined with other coupons, promotions, or special offers. Chipotle reserves the right to modify or terminate this offer at any time without notice. Additional restrictions may apply; void where prohibited.

*AVAILABLE WHILE SUPPLIES LAST. Entrée Codes for first 5,000 participants who text the keyword that appears in certain Tweets from @ChipotleTweets to 888-222 during USMNT's world championship game(s). Open to 50 U.S. states & District of Columbia. 13 years of age and older. Promo begins when Tweet is published and ends when game is over or when all codes have been claimed, whichever occurs first. Limit one code per mobile number. Chipotle will let you know if you've won by sending you a text message. Standard text and data rates may apply. See Terms for complete details: chip.tl/usmnt.

About Chipotle
Chipotle Mexican Grill, Inc. (NYSE: CMG) is cultivating a better world by serving responsibly sourced, classically-cooked, real food with wholesome ingredients without artificial colors, flavors or preservatives. Chipotle had nearly 3,100 restaurants as of September 30, 2022, in the United States, Canada, the United Kingdom, France and Germany and is the only restaurant company of its size that owns and operates all its restaurants. Chipotle is ranked on the Fortune 500 and is recognized on the 2022 list for Fortune's Most Admired Companies. With over 100,000 employees passionate about providing a great guest experience, Chipotle is a longtime leader and innovator in the food industry. Chipotle is committed to making its food more accessible to everyone while continuing to be a brand with a demonstrated purpose as it leads the way in digital, technology and sustainable business practices. For more information or to place an order online, visit WWW.CHIPOTLE.COM.

About U.S. Soccer
Founded in 1913, the U.S. Soccer Federation has been the official governing body of the sport in the United States for more than 100 years. During that time, the sport has grown tremendously at all levels. As U.S. Soccer looks towards the future, its mission is to make soccer the preeminent sport in the United States. With a long-term and strategic approach, U.S. Soccer aims to accomplish its mission by supporting its members to increase participation at the youth and adult levels, develop world class players, coaches, and referees to consistently win at the highest levels on the international stage and serve the fans by engaging with them in deeper and more meaningful ways. For more information, visit ussoccer.com.